Home
Our Collection
All
SHERLOCK HOLMES
THE "FARE WELL" MS

DOYLE OFFICIALLY ENDS THE CAREER OF THE MOST ILLUSTRIOUS OF ALL LITERARY DETECTIVES.

A HISTORICALLY SIGNIFICANT DOCUMENT – Containing a Synoptic Publishing History of the Sherlock Holmes Stories (including an explanation of Doyle’s motivation in “killing off” Holmes at the conclusion of the Memoirs.)

Composed for the March 1927 Strand Magazine, this “Fare Well” manuscript is Doyle’s public announcement that he will no longer write Sherlock Holmes stories. This manuscript appeared on pp. 281-84, with minor textual revision, as “Mr. Sherlock Holmes to His Readers.”  It was subsequently re-edited and used as the preface to The Case Book of Sherlock Holmes, published in June 1927. Both the manuscript and the Strand publication contain a paragraph announcing a competition challenging readers to guess Doyle’s favorite Holmes stories (with the manuscript indicating that Doyle originally planned to select only his top six stories rather than the magazine’s dozen). This competition-related paragraph was edited out in the Case Book preface – as, too, was the paragraph voicing Doyle’s concern that readers might have thought the quality of the stories had declined over time. 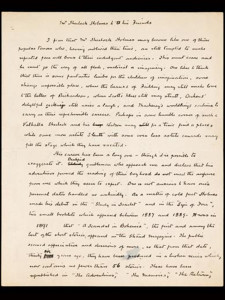