Home
Our Collection
All
HEISENBERG MS
ON QUANTUM PHYSICS

A HISTORICAL AND PHILOSOPHICAL OVERVIEW

HEISENBERG, Werner. “The Development of Particle Theory”. Autograph Manuscript. [March 5, 1964].  In German. 3 pages. Heisenberg’s Lecture Notes for a talk delivered in Budapest on the occasion of his receiving an honorary doctorate from Eotvos Lorand University.  [WITH] A 2-page Autograph Letter Signed to the president of  the University, to whom this manuscript was apparently presented. UNPUBLISHED.

A Major Scientific Statement by the Chief Architect of Quantum Theory – essentially an unpublished “essay” on the History of Quantum Physics. Heisenberg’s papers are institutionalized, and the present may well be the only Heisenberg manuscript of its kind in private hands.

Heisenberg here explores the particle’s historical conception — contrasting Bohr’s view with current “pictures” and noting the “mathematical complication” of the modern conception. Referencing Einstein and Newton, Heisenberg then proceeds to explore the meaning of “Unified Field Theory” and equates it with “Unified Particle Theory.” Heisenberg affirms that quantum theory is essential to such a unified formulation and further states that mathematical abstraction is indispensable to its achievement. After considering the meaning and implications of a “self-contained theory,” Heisenberg concludes with “a philosophical interpretation” — propounding a “Platonic” vision of particles as “mathematical forms.”

Significant scientific documents by Heisenberg are Exceptionally Rare in Commerce 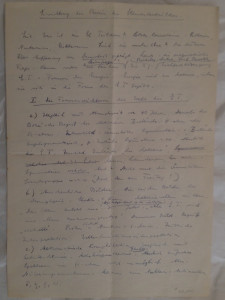