Home
Our Collection
All
AUGUSTINE MS
THE CONFESSIONS

A SUPREME TEXT OF THE WESTERN CANON

Augustine’s Confessions transcends categories: it is at once a classic of faith, philosophy, history, and literature.  Deemed “The First Autobiography,” Augustine’s Confessions provides “an unbroken record of his development of thought and [is] the most complete record of any single person from the 4th and 5th centuries.” But in keeping with the dual meaning of the term “confession,” the work is both an introspective record of past misdeeds and an affirmation of God’s greatness and love — the work throughout blending autobiography with philosophic and theologic meditations.  The present manuscript precedes the printed text by more than 300 years. It is quite possibly the oldest exemplar in private hands.

The most influential of the early Church Fathers, Augustine was the primary conduit for the transmission of the Platonic philosophy into the Latin West. Augustine found in Platonism a truth and metaphysic capable of sustaining faith and dogma – it was instrumental in his own conversion to Christianity (as the Confessions evidences) — and it is through Augustine’s authority and prominence that a transfigured (Christianized) Platonism became the basis of medieval philosophy. Though Platonism enforms the argument of virtually all of his texts, the Confessions is Augustine’s single most powerful attestation of the philosophy’s living  force.

In addition to a complete text of the Confessions (on leaves 1r-75r), this manuscript also contains the first 11 chapters (of 19) of Hugh of St Victor’s commentary on The Wisdom of Solomon (in Salmonis Ecclesiasten homiliae, on leaves 75r-104v), a practical manual on the spiritual life. Hugh was the most important theologian of the 12th century: a prolific author and an advocate of science, Hugh was “an Augustinian in theology and a Platonist in philosophy.”  Hugh’s In Salmonis was in fact one of the last books he wrote. And insofar as the present manuscript is contemporary with Hugh’s lifetime, it is possible that the present text represents all of the book then existent at the time of transcription; alternatively, it is possible that the first 11 chapters of the work was all that the copyist sought to transcribe – for Hugh’s text definitively concludes mid-page.  This text appears to be rare in manuscript format, and the present manuscript is the earliest recorded in the Schoenberg Database.

The manuscript perhaps originated from a Cistercian scriptorium (as per its inscription: “Venerabilis conventus syon”). It belonged to Guiglielmo Libri in the 19th century; thence passing to the noted American bookseller Henry Stevens; thence passing into the collection of Sir Thomas Phillips (the greatest modern collector of books and manuscripts);  and ultimately passing into the Bergendal collection of Medieval text manuscripts. 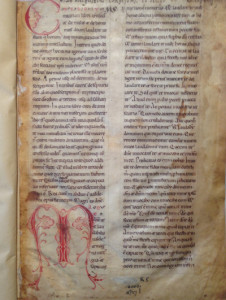 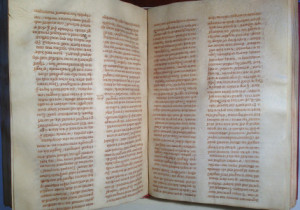